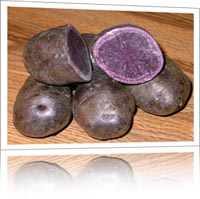 Will Bilozir has invented a blue potato which surpasses all other blue and purple varieties for color, taste and texture.

True Blue Potatoes keep their vibrant color when baked, boiled, and mashed or microwave cooked. They are especially eye-catching in potato salad!

Will Bilozir "The inventor of True Blue Potatoes", PBR in Canada (2000) and PVP in the USA (2001). The variety has been DNA "Fingerprinted" for variety identification using the RAPDS testing system.

True Blue is a blue-fleshed, blue skinned variety, that is oblong, shallow eyed, mid-sized, and heavy yielding. It is also resistant to BRR, and can be grown successfully under organic conditions.

The flavor and texture for fresh market use is excellent, and it is well liked in California. It is also superior for the manufacture of True Blue potato chips, and a large amount of chips have been produced in Ohio for the North-Eastern US market.

The potato keeps well in storage and tolerates colder storage temperatures that result in a longer storage period. Stored at 4 C the variety will keep until June or July. 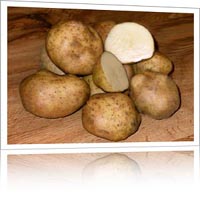 Snowflake are a new variety of white potatoes, which is large, round and thin-skinned. It makes very good baked, mashed or french-fried potatoes. 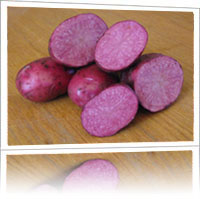 Candy Floss is a mid sized red skin, red flesh potato that Will developed in 1998. When cooked, the flesh becomes brilliant pink with a firm buttery texture.